Here’s an excerpt from my latest book ‘2 Dangerous Things A Year: Your ‘Change Evolution to get ‘Change Fit”. There are four stages in a person or team’s progress in evolving their change readiness: ‘Change Sloth’, ‘Change Strain’, ‘Change Workouts’, and ‘Change Fit’. Available on Amazon in paperback or Kindle. Sign up for a monthly email summarising posts like these.

One example of a practice that may indicate you’ve entered the ‘Change Workouts’ stage is ‘Workplace Exaptation’. Exaptation is an evolutionary term for adaptations that evolved for one reason but later turned out to be useful for other things. Bird feathers originally were for warmth and attracting mates. It was only subsequently that they assisted in flight. There are plenty of Exaptation examples in business and workplaces too – what I call, ‘Workplace Exaptation’. Viagara, for example, was originally developed as a heart medication.

Another significant benefit of taking a more proactive stance on change, trying new things, or doing 2 dangerous things a year, is that you test many small ideas. Even if those ideas don’t initially work out or seem to amount to much, you still have those ideas. Keep them. Store them clearly and logically so they’re retraceable for future reference.

Both my kids worked their way through high school and much of university at the same local supermarket. That store had an idea. The idea even had a name – ‘Fresh Eyes’. Originally, and very successfully, the idea was that the weekly audit walk by managers required in their departments assessing things against a prescribed checklist should be rotated so that the audit walk was still conducted each week, in turn, but a different manager did it of a different department. It lessened the danger of over-familiarity and assumptions so they wouldn’t see the wood for the trees.

The idea worked (and works) great so they could quite reasonably have left it at that and patted themselves on the back. But they didn’t. They asked themselves – if this is such a great idea, where else might it be applied. ‘Workplace Exaptation’ in action.

They took that original idea of responsibility rotation and ‘Fresh Eyes’ and used it with job interviews. My son was employed in the seafood section. He was originally interviewed by someone from HR, not because they were from HR but because it was their turn. Next, it was someone from Produce, a less-experienced supervisor. They had fresh eyes and a different perspective on my son, plus it gave the interviewer some experience. Win-win! Lastly, he was interviewed by the manager of the seafood department. It’s a robust process structuring-in diverse perspectives, yet retaining consistency with a prescribed checklist. Successful ‘Workplace Exaptation’ in action.

If you’re curious as to the extent to which your personality’s natural predisposition towards risk is contributing to being a handbrake or an accelerator on your progress, you can take my online assessment and find out. It’s at www.amIdangerous.com .

This was an excerpt from my latest book ‘2 Dangerous Things A Year: Your ‘Change Evolution to get ‘Change Fit”.  Available on Amazon in paperback or Kindle. 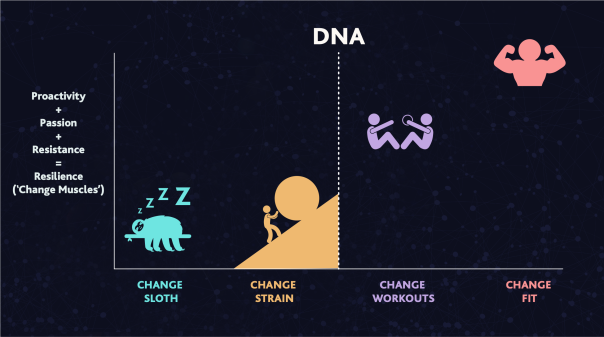